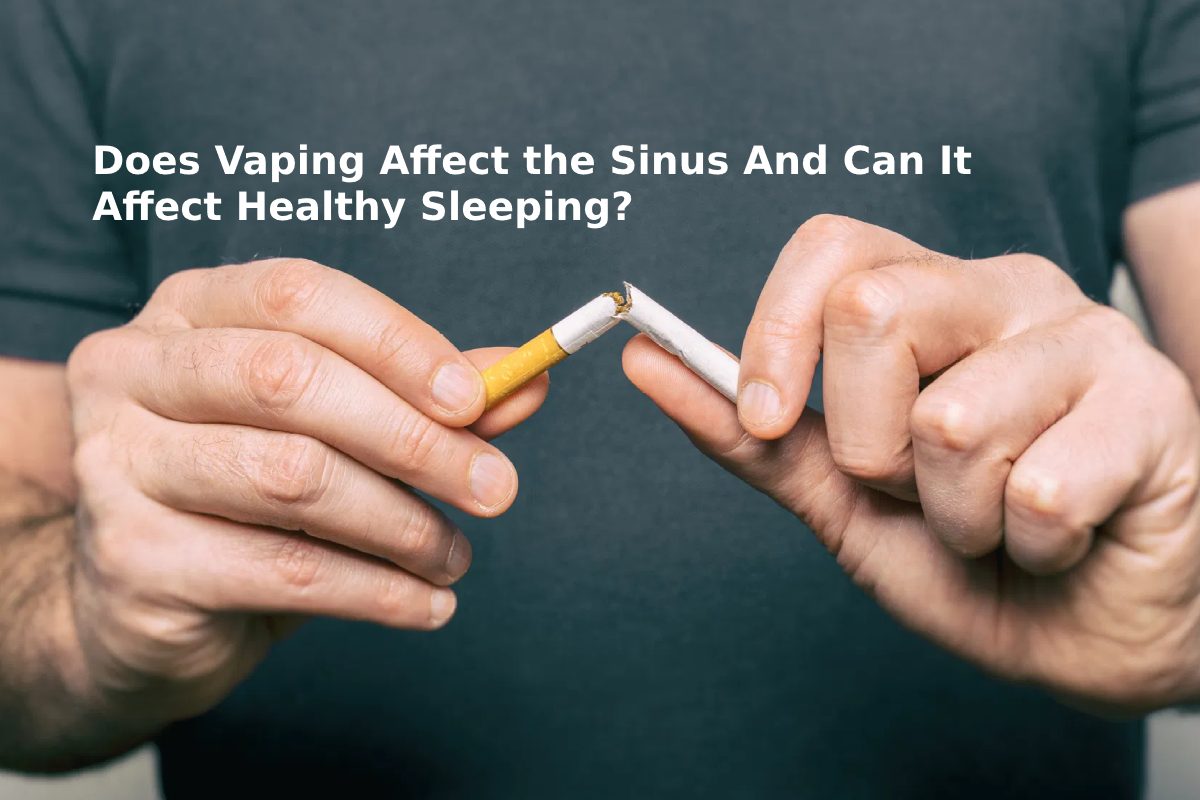 Does Vaping Affect the Sinus And Can It Affect Healthy Sleeping?

Vaping Affect the Sinus – Studies have shown that e-cigarettes cause changes in the immune system, including increased sensitivity to allergens. This can make diseases like sinus infections and bronchitis worse. In fact, a study published in the journal Clinical and Translational Allergy shows that vaping can increase allergic sensitivity. Now, this warrants the question “Does vaping affect sinuses?” As a matter of fact, vaping is associated with an increased risk of getting a sinus infection.

Smoking also affects the lining of the nose, which is lined with hair-like cells called cilia. These cilia are important to keep the airway clear. When the cilia do not function properly, mucus can build up, resulting in a sinus infection.

This inflammation may be due to a change in the gene expression in nasal mucus membranes, which are responsible for the immune response. While this is a well-known and expected effect of smoking traditional cigarettes, it is also seen in e-cigarette users. A dampened immune response can cause more microbial infections and lead to chronic sinus infections. In addition, the vapor from an e-cigarette can aggravate already existing conditions.

Nicotine is an addictive substance that is found in cigarettes. Research has shown that it inhibits deep sleep in mice. The study showed that the mice were more tired when they had a nicotine fix, compared to control mice. In addition, the mice were more sleepy when nicotine was introduced to their diet.

Chronic sinusitis is an inflammation of the nose and sinuses. It can also lead to serious infections, such as infection of the bones or skin. This condition can be prevented by avoiding contact with sick people and washing your hands frequently, especially before meals. You should also control your allergies and avoid contact with air pollutants and cigarette smoke.

Cigarette smoke damages the mucus secretions in the nose and causes infection. Your nose has hair-like structures known as cilia that help move mucus out of the nose and down the throat. However, smoking paralyzes these cilia, so your mucus cannot drain as freely. This causes mucus to build up in your sinuses, becoming a breeding ground for germs.

Nicotine is a known irritant to the respiratory system, and it has also been found to cause respiratory symptoms in people who vape. Exposure to second-hand vapors of nicotine can lead to a variety of symptoms, including shortness of breath, wheezing, coughing, and chest pain.

Researchers have shown that nicotine can interfere with mucus clearance in the airways, which can worsen existing bronchitis. This is due to nicotine impairing ciliary beat frequency and dehydrating airway fluid, which causes mucus to be more sticky and viscous. As a result, the mucus can become stuck in the lungs, leaving the lungs vulnerable to bacterial infections and illness.

Although researchers are not sure what causes the condition, they believe that vaporized nicotine causes a local inflammatory response in the lung. This is why some people report a sudden onset of symptoms, and others take weeks or months to develop the disease. In the worst cases, people will need to seek medical attention and undergo chest X-rays or CT scans to rule out other respiratory illnesses.

The nicotine contained in e-liquids can cause a sore throat. This irritation can occur due to the nicotine or the flavorings that are included in the e-liquid. Also, the bases that the e-liquids are made from can also cause throat irritation. These bases are most commonly found in the form of propylene glycol and vegetable glycerol.

The best way to minimize throat irritation while vaping is to reduce the level of nicotine in your e-liquid. Try switching to a lower nicotine strength or using a lower PG ratio in your device. It will be easier to breathe after vaping with a higher VG ratio.

Which Plastic Surgery Procedure Is Right for Me?